The best way to support Jimmy is by purchasing and downloading your own copy of the latest album 'The Water' from this website.

The best way to support Jimmy is by purchasing and downloading your own copy of his albums from this website, like this one 'Sociable Sounds'.

"Jimmy Dowling is authentic and original... I love this album"
- Don Walker
"Jimmy's got a lot of stories to tell, and tells them his own way - with strong words and a steady hand"
- Jeff Lang
"A modern day Dickensian folk blues artist and a friend of mine"
- Matt Walker
A ballad singing song slinger, whose worked around the world on land and sea. A story teller, who writes with the keen eye of a poet and whose music could be the spawn of a sea shanty and a jazz standard.
Fond of the slower tempos and  waltzes, Jimmy Dowling blends the overtones of a jazz sensibility with simple structures, and possesses an uncommon lonely magic. He's known for a conciseness and depth of lyric, a healthy use of space in the instrumentation and a natural swing in the vocal delivery.

New 15 track album, co-produced with Matt Walker – out mid November. Preview the album here. The tracks you are hearing include 'Trawler' featuring vocal harmonies by Lucie Thorne. Painting of Jimmy and Matt Walker by Shane Bishop 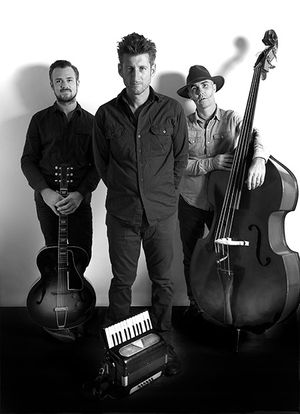 For Dowling’s latest LP, he took up Matt Walker’s offer to produce the recordings and again enlisted the likes of Walker, Hadley and Costigan, Grant Cummerford, Hamish Stuart, Roy Payne and the recently departed James Cruickshank to bring his woozy balladeering to life. These are associations he made living and playing in Melbourne. “I find it’s the best, most direct route to musical friendships is to meet onstage,” says Dowling, “’cause you sort of get down to the nitty gritty of what you’re doing.”

With a deep passion for acoustic jazz, a thickly-consonanced, Chet Baker midnight voice, and a knack for distinctly Australian portraits, Dowling is a striking talent as a singer-songwriter. He’s earned the odd Don Walker comparison and here he acknowledges The Don’s powers by taking his ‘Sweet Eyes’ and turning it into a lilting waltz.

‘Sweet Eyes’ is the sole cover on a 15-track album whose genesis lays in a poem, ‘The Death Of Les Darcy’, by Peter Fenton. Dowling approached Fenton about the idea of setting his words about the famous Australian boxer to music and coaxed him into writing a couple of extra verses. Walker added the “prowling” (in Dowling’s words) guitar and the recording was underway. The track pairs well with another tribute to a great Aussie sporting icon, Michael Peterson, a duet with The Cruel Sea’s James Cruickshank, who passed away from cancer this month.

“Himself and I did the tribute to Michael Peterson,” Dowling confirms. “I wrote the words and the melody and the chords and then came up with an idea based on the fact that I wanted to use surfing musicians to record it. He was just down the way and because he lived in the old rectory at St Kevin’s, the oldies got him to play the organ at Mass. So he had access to that. So instead of using a bass in the song, I got him to play bass pedals on the pipe organ. And he came up with the guitar and a couple of other things.”

There’s also a song, ‘Black Book’, which features Cruickshank’s 12-string guitar, stolen from a festival and then found in a pawn shop by Dave Graney. Then Dowling rediscovered a recording of a short organ piece played by Cruickshank and decided it should close the album, paired with a recording of howling wind.
The sea features prominently on Blessing & Cursing. Even beyond the more obvious references, like ‘MP’, ‘Trawler’, and ‘Deckhand’, there are constant references to the ocean.

“Yeah I used to work on the sea,” Dowling confirms. “On commercial fishing boats. And I love surfing and just that magnetism that the ocean’s got. Whether you’re living by it, or living on it. Or living away from it and you’re looking forward to going to it. You’ve got ‘Fundy Mud’, that’s on the Bay of Fundy in Canada. And I wrote ‘Parrots’ there too.

And there’s a bit of Vancouver in it. There’s quite a lot of Canada sprinkled through it. And there’s ‘Deckhand’, which was the thought pattern of a deckhand. And whatever that ocean does for your brain. If you think you think a lot on land, you think about three times more when you get out to sea. I don’t know what it is about it but it’s just what happens with me.”

The sea also influences the music significantly. Much of it sounds like its struggling to maintain balance on sea legs, lurching and swaying, with pedal steel rolling through like waves, and everybody listening intently for the next change in weather. Some songs, like ‘While I’ve Got Him Occupied’, celebrate more upbeat, honkytonk forms, whilst others, the particularly affecting ‘Leaden Heart’ being a prime example, barely stir, relying on just acoustic guitar notes, Dowling’s syrupy voice, and pedal steel and tin whistle intertwined in musical intercourse. Another standout, ‘Rollin’ Drums’, was conceived during a day of manually removing the tops of steel barrel drums, the rhythm born of the hammer’s beats. That’s putting the roots back into roots music, right there!

Published in the Shortlist section of The Sydney Morning Herald, Friday 4
JIMMY DOWLING | BLESSING & CURSING | Stovepipe Records
A woozy balladeer is how north coaster Jimmy Dowling has been described, and it’s a tag not far wrong. Gorgeously mournful, Dowling’s newest cut brings to the fore this wooze, 15 tracks that shuffle shambolically along, a quiet beauty inherent to all, his strength as a songwriter marrying with his husky, down turned voice to create something truly special.
Based deep within the tangled briar of country music, Dowling takes inspiration from the sea on Blessing & Cursing, continuously referencing surfing, fishing, “plumes of white spray ripped off the tops of swell in the wind”. Song titles like ‘Beachcomber’, ‘Trawler’ and ‘Deckhand’ highlight this inspiration, the latter a haunting spoken-word piece with just a smattering of eerie guitar.
Dowling brings with him a troupe of exquisite players in Matt Walker (who in addition to adding guitars and mandolin, produces the album), bassist Grant Cummerford, Shane Reilly on pedal steel and the extremely subtle Hamish Stuart on drums. Liz Stringer, Van Walker and Lucie Thorne add backing vocals throughout. As well, the late and great James Cruickshank adds guitars, percussion and pipe organ on a couple of numbers, recorded before his death last year. Blessing & Cursing is sublime in its poetic nature, a fantastic record.
4/5
Samuel J. Fell